A jury was picked late today in the weapons conspiracy trial of accused arms trafficker Viktor Bout; opening statements start Wednesday.  A final jury pool of 9 women and 6 men were picked for the 12 jurors and 3 alternates. The trial day opened with a crush of spectactors, so many that none of the regular courthouse reporters could squeeze into the courtroom. They finally got inside, but only after it became clear that the Bout trial would be a hot ticket for the next few weeks. Jury selection is at the top of the court’s agenda. Both sides will use long lists of questions to pare down a jury. U.S. District Judge Shira Scheindlin weeded out many questions she perceived as inflammatory. The lawyers will still be able to ask a wide range of questions, probing prospective jurors from what they think of the use of paid undercover informants to their reaction to Bout’s Russian background.

—CNN, “He unquestionably made some of the worst wars of the 20th century, early 21st century, much worse than they would have been,” said Douglas Farah, a national security consultant who co-wrote a book about Bout.”

—AP, “Jury selection got off to a rocky start in the arms sale trial of a former Soviet military officer known as the Merchant of Death when reporters were initially kept out of the courtroom.”

—Reuters, “Eventually, some of us were allowed in and a second courtroom with a live video feed was set up. But those first five minutes? Lost forever. Bout, a former Soviet air force officer who was the subject of a book titled “Merchant of Death,” faces charges that include conspiracy to kill U.S. nationals and conspiracy to provide help to a terrorist group. He faces 25 years to life in prison if convicted.”

—AFP, “The trial of Viktor Bout, a Russian ex-army officer alleged to have overseen the world’s biggest private arms dealing network, starts in New York on Tuesday with jury selection.” 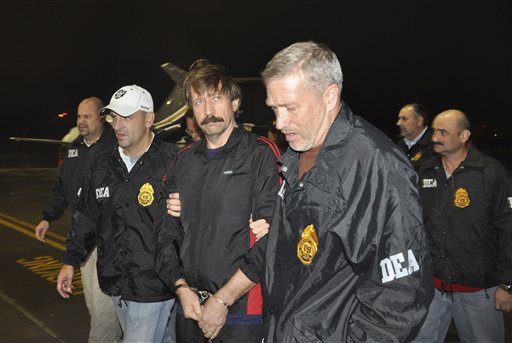